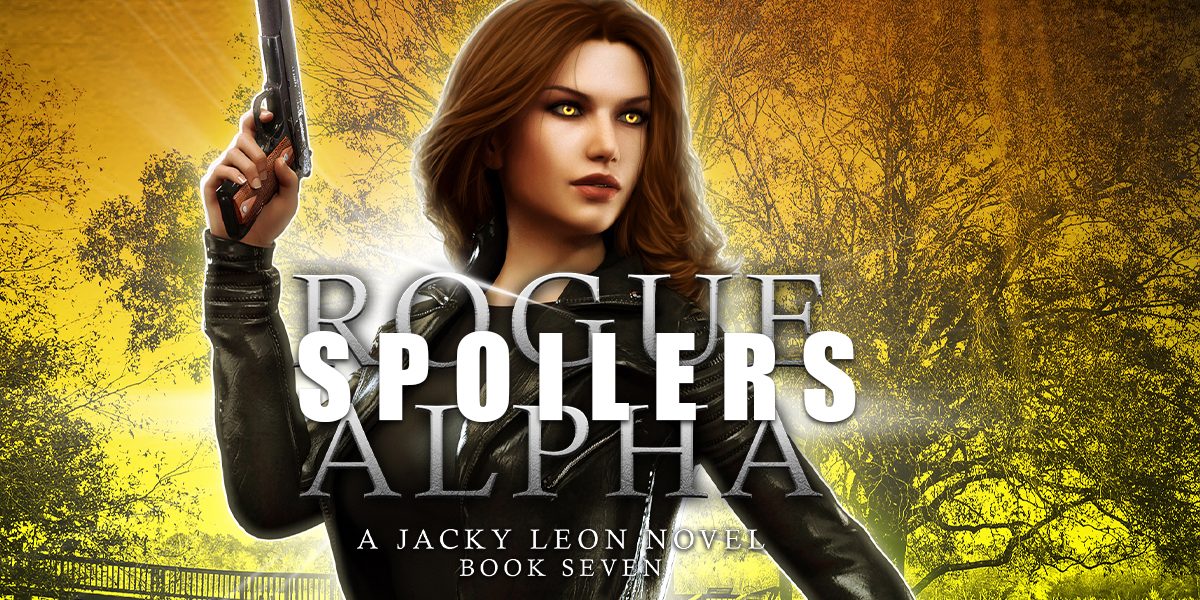 Spoilers below about Rogue Alpha. (And there’s a LOT to talk about. I’m going to get into a bunch of it because I’m really excited about the changes this book brought to the series and the future of the series)

Buy it here if you haven’t yet: getbook.at/RogueAlpha

Not all witches are bad, but they’re getting a bit of a reputation for being somewhat of a problem for other supernaturals at this point. Maybe the next Tribunal Archives series will be my witch series. It was going to be, but then Everly invaded my brain space and refused to leave.

But that’s not the point.

The point is: There are witches out there who believe it’s their god-given right to enslave the moon cursed. If you think it’s over with this book, you are very very wrong. Welcome to the second half of the Jacky Leon series. Truly.

I have to keep telling people I have a plan. 80-90% of the Jacky Leon series is not “on the fly, whatever I feel like writing that book”. I plan this stuff out (The other 10-20% gives me the freedom to shift or evolve if something changes for characters in ways i don’t expect). In a 15 book series that plan is really important. At book 15, Jacky Leon’s story ends. Finale, moving on, etc. Rogue Alpha introduces (some of) the problems Jacky needs to face to get to that ending, plus…

Been waiting for that and it could only happen one way for these two. Jacky and Heath might not have fireworks, but they have this steady burn of togetherness that I find genuine and adult. They’re not teenagers with this heart racing, the world is ending passion. They’re mature about it, they’re partners. For a man like Heath, having a partner is a new experience that he craves and wants to keep. For Jacky, it’s just how relationships should be done and he’s the man she wants to have her partner.

My sweet babies. I love them. Love Carey, Landon, and Dirk too. And my good boy, aro ace Oliver. Let’s discuss those babies.

Carey was fun to write this book, honestly. From being a pretty typical teenage girl to a supportive daughter there for Jacky after the attack. She’s more complex than I think many will give her credit for. She’s tough and yet… normal. She makes her mistakes with her dad and brother and Jacky, but she steps up for them too.

Landon and Dirk? Silent, stoic men that don’t open themselves up to many… except each other. Their off-screen romance was because they would never have a romance in front of Jacky of Heath. Never. But now? They’re together now! And with that comes how they act in private but not private anymore. Yeah, they joke and talk shit all the time together and it’s bleeding into their public faces. they relax each other. They’re men with burdens, but together, they can be almost boyish, something neither of them had a lot of growing up, no matter how much their loving fathers tried to give it to them. (and oh shit, Dirk is a werewolf now! Feel free to speculate)

And Oliver, finally in the thick of it. He’ll be back. He’s rattled, but he’s a good kid. Everything is out of his weight class. his one friend was brutally attacked and Changed. Will he be next? No one knows.

And let me take a moment to bring up this new cast of characters joining the crew in Jacksonville, Texas. (They’re not all on the Tribunal Archives website yet but here’s the site for reference in the future: https://tribunalarchives.com/

Fenris: I don’t even know. Enjoy some purely chaotic energy and ridiculousness. Talk about things I didn’t even expect… (But now I have him folded into the plan, so it’s okay)… (WHAT IS YOUR REAL NAME?!)

Teagan: Is getting a standalone novella. Full Moon Magic, actually. I can finally tell you! YAY! You’ll find it 4 October, 2022 in the Rituals and Runes Anthology. Finally time to get into the head of a Beta and figure out what makes them tick. Also, will it make him leave the pack already? You’ll have to find out. He’s the legal guardian of two older teens. I never mention it, but those boys are 16/17 in Rogue Alpha, and generally, that makes them old enough to know the laws of their kind. However, if another pack attacked, they would be exempt from punishment/violence because of their age. That will change at 18 for them.

Shamus and Co: The cool family is back. Loved writing Stacy and Shamus in Oath Sworn. Happy to see them back.

And Ranger… Poor Ranger. God, I hurt him really bad. He wasn’t mate bonded with Sheila but it was really heading that way and… yeah, I definitely ruined it. He’s a good man, though. He’s going to do his best on three legs and in a small pack, Heath will be able to keep him alive while he adjusts.

There’s more. There’s just so much this book, but this is what I’ve got to start off the discussion. You guys can theory craft and speculate in the comments. Enjoy!

This book was freaking amazing as usual and I can’t wait for July ! I loved every single aspect of it and don’t worry, it’s pretty obvious that you’ve a plan, the way this masterpiece is crafted? I’m not worried. I’m trying to track all the little bits and pieces to the conclusion! Thank you

I’m so glad someone sees it 😭💙

This book was so amazing and worth the wait. I love, love, love Jacky. I think she’s my favorite character from all your series. You’re one of my go to authors, thank you for writing so many great books for us. Please don’t burn yourself out cause what would I do without you. Although the wait for the next Jacky will be rough, May is too far away! Hahaha.

July! May is the last Kaliya Sahni novel 💙

Yeah, it’s a bit of a longer wait because I need to get Jacky on her new January/July release schedule! I’m sorry! This is the only time it should ever be a 7 month wait instead of a 6 month wait

Loving this. All the complexity and great characters. If I had any complaint it was it ended too soon. Looking forward to seeing where this goes with Hassan and Niko.

It’s the longest book in the whole series! 😂

My heart broke for Heath, Landon and Carey but I’m glad they can start really healing knowing Richard was spelled. Such a phenomenal book. I can’t wait

I love Jacky so much can’t wait for the next one. She challenges the world to be better.

I hope Hassan will grow, but if not maybe Subira can help Jacky out….

You are a great author

I hope Hassan will grow too, and move past his hate. But I think it possible that Subira will play a bigger roll in Jacky’s life from here. I also hope she finds other allies among the warecats of the Americas.

I loved this book so much and it also made me want to reread book 1 to see the coup unfolding with new eyes. It was my impression or did Jacky and Heath get a mate bond? Like a real one. It felt that after what she said to him in the cage.
I love all the tribunal archives stories and I CANT WAIT for Jabari’s next month
Happy Holidays everybody ❤️

They haven’t. There will be 0 doubt in that moment if it happens. It’s that sort of thing that really can’t be ignored between two people.
Some moon cursed take years to form one, others can do it quickly. It depends on the couple.

First, Thanh you so much for writing 6 well written books a year -I do not know how you can do it. The Jacky Leon series is truly excellent. I read 200+ books a year and I have found that many series become predictable and repetitive after the 3rd or 4th book. This is definitely not the case with Jacky Leon.

The development of key secondary characters such as Landon and Cary was excellent. I also really enjoyed how you developed the theme of family in the book both through Heath’s and Jacky’s family and the family concept of a werewolf pack.

Questions I am looking forward to being answered in the next book are:

My questions too… through I’m looking forward to seeing it play out.

After reading the book for a second time, another question came to mind. When Jacky frees Fenris from his cage, he mentions that he got scars from one of Jacky’s brothers. Which brother? If it was Niko, how will he feel about having Dirk in a pack with his old enemy Fenris?

A lot of fun information came out about “Fenris” 😉

Oh I absolutely loved all the development. I had a bit a lot a heart attack when Dick was hurt. Thinking he could die was scary. I loved how he and Jacky are getting closer and their family is solidifying.
I am a bit torn about Richard. On the one hand it pains me they had to go through all of it again, just when it seemed they were getting over the loss and betrayal but on the other I am glad Richard didn’t really mean to betray his family. They can now heal and mourn him as they probably wouldn’t let themselves before, especially Carey.
Jacky has a werewolf pack now! Who would have thought. How will the family react?
I hope Nico gets on board and supports both Jacky and Dick. I am kind of looking forward to that reveal.

Rogue Alpha was such a pleasure to read! A lot of feels in this one! I read a lot of books and some of them are very predictable and follow the same “template”. That never happens with your books. I could never guess where things will go and I feel like I’m on the edge of my seat the whole time I read the book. Thank you for writing such engaging stories!!