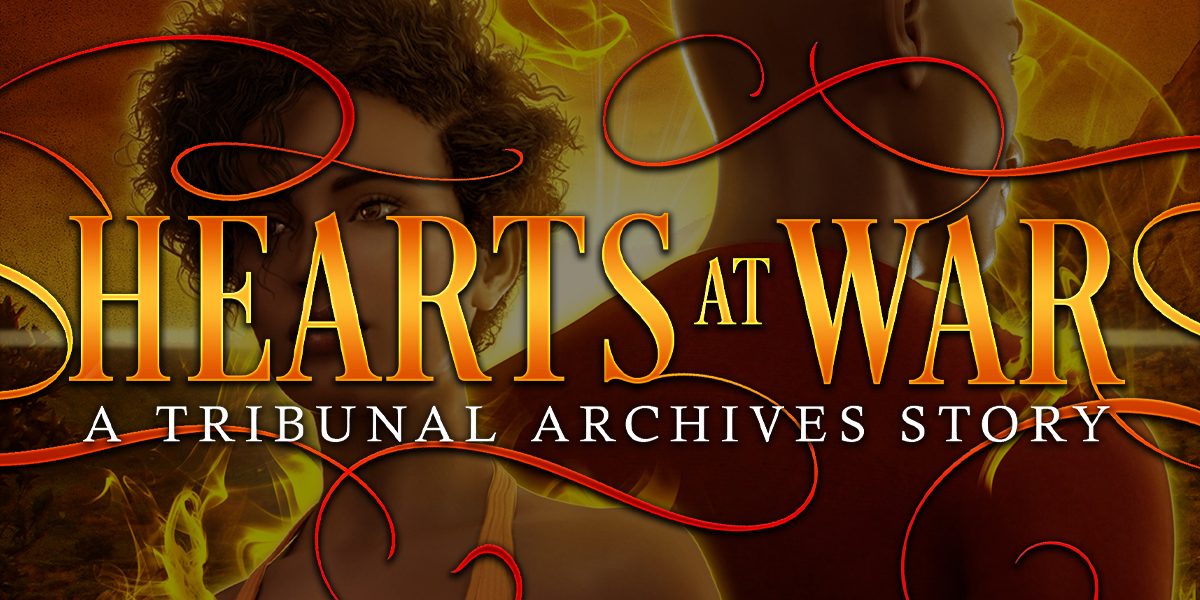 Here we are, with my first ever standalone solo release!

Because I’ve seen these questions, I’m going to get to them with the release of Hearts at War!

Do I need to read Jacky Leon’s series to understand this book?

No, you don’t need to read Jacky Leon to understand Hearts at War. I actually -tested this- by having it read by someone who hasn’t read Jacky Leon. Her comment was (paraphrase) “you see a lot outside of this specific story and you know other stuff is happening, but the story of Aisha and Jabari is there and it’s completely understood.” To me, that just says “paranormal romance in a world”. We’ll be fine.

If I read Jacky, will this spoil anything?

Well, if you are ever wondering where a book comes on the timeline, you can find out: https://tribunalarchives.com/timeline/. Using the timeline, especially for books that really feel like they tie into other character’s stories, will tell you a lot. Hearts at War comes after Rogue Alpha and before Bitter Discord. I’m releasing it in it’s chronological position. This will vaguely spoil things from Rogue Alpha because of that. It doesn’t tell you literally every twist or spoiler from Rogue Alpha, but some things will be brought up. If you haven’t read up to Rogue Alpha and want to go into Jacky’s series completely blind: do not read this book. Come back to it after Jacky Leon 7. Jabari is her brother, so clearly he’ll bring up her, their other siblings, their parents, and other situations. He’s a main character and his siblings are a major part of his life. They’ll get mentioned. I won’t tell you how much, because it all turns back to a really personal place for Jabari and that’s a spoiler for this book!

This is all I’m willing to say on the matter of it. No, I won’t answer these questions for main series books. The timeline is available. This will might be the only time I answer these for any book, because for any of Jacky’s siblings, the same things will probably ring true.

This is a big test book for me. It really is. I have no idea if people are going to want standalone stories for other characters. Zuri was a novella and I thought y’all really came out to support. But it was just a novella, and it was in an anthology. This is a full-length novel. It’s 90k words, longer than Oath Sworn and Bounty for example.

It’s a little scary to release. But when you get to the spoiler post, when you’re ready for it, this book is scary to release… but it was so wonderful to write. I hadn’t written a book with so much flow in my writing process in a long time. I normally always have some flow and I type fast, but this book flew out of my heart and brain, onto the page without missing a single beat. It never made me stop. Start to finish, I wrote 90k words in about 11 days. I didn’t want to stop. And I’ll tell you why in the spoiler post.

So yay, Hearts at War is here!

Two broken hearts.
Jabari and Aisha had a wild romance once, a beautiful year of bliss. She thought she had found her forever, and he felt his dead heart being pulled on in a way he thought was impossible.
However, Jabari had already lost the love of his life and there was nothing that could repair that damage. So he walked away. He was the General, as many called him, and he knew just how to strike. He broke Aisha’s heart so perfectly that he was certain she would never try to pull at his dead heart again.

One innocent life.
Aisha didn’t know she was pregnant until after he was gone. So many things ran through her mind when she found out. Jabari, son of Hasan, was the oldest son of the most powerful werecat family in the world. It was fear, not anger or heartbreak, that kept her from reaching out sooner. She had feared that she would lose her son to the political machine that was Jabari’s family, the ruling family of the werecats. Feared that her son would lose his chance to choose his own destiny.
She never expected out of control magic and that could not only ruin everything…
It could get their son killed.

It’s a war sixteen years in the making.
Aisha’s secret couldn’t be kept forever and only Jabari can help their son.
The battle lines will be drawn as two broken people once again face off over the very thing they need the most. In this conflict, the warriors won’t carry swords.
Their hearts will be the only weapons they have.

Yes I’d like it in audio. I’m an audio book fanatic & will purchase anything you write. Especially if it’s a part of Jackie Leon’s story!

I actually don’t know if it will get audio yet. That’s completely undecided and it’s for a number of reasons.
Sales of a series/book really plays a factor. Sadly, the last time I tried to do audio quickly (with the Everly Abbott series), it didn’t pay off because that series isn’t doing well, ebook or audio. I’m committed to doing all the series in audiobooks but it’s made me much more wary of doing new projects. I made Jacky Leon prove itself as a series before I considered audio. (As in a handful of books were already out before I started). I did the same with Kaliya. I tried to appease audiobook listeners with Everly by starting it at book one and it hasn’t done well, even though I put that work into it. So Hearts at War has to prove as an ebook that people want standalone stories as well. Hearts at War is a standalone. It’s not required for the Jacky Leon series, therefore, the decision for audio is a different ball game.

There’s also style of book. It’s a rotating POV paranormal romance done in third person past (while JL, KS, and EA are first person past). I have to decide: one narrator or two (two narrators would be one person reading Aisha chapters and one person reading Jabari’s chapters). My current narrators might not want the project (due to it’s steam level. It’s spicier and more graphic than my UF series).

So, it’s a very complicated situation and I have to weigh my options carefully. I’m sorry. It could take 3-6 months before I make a decision. I could never get to it because the ebook sales wouldn’t support it. Audiobooks might make 5-25% of what an ebook does in a month. If an ebook doesn’t do well, there’s little reason to spend thousands on audio that does much worse.

I loved this book. I definitely think its beautiful as a stand alone but it ties into the tribunal world so well. Thank you for letting us see deeper into Jabari’s life