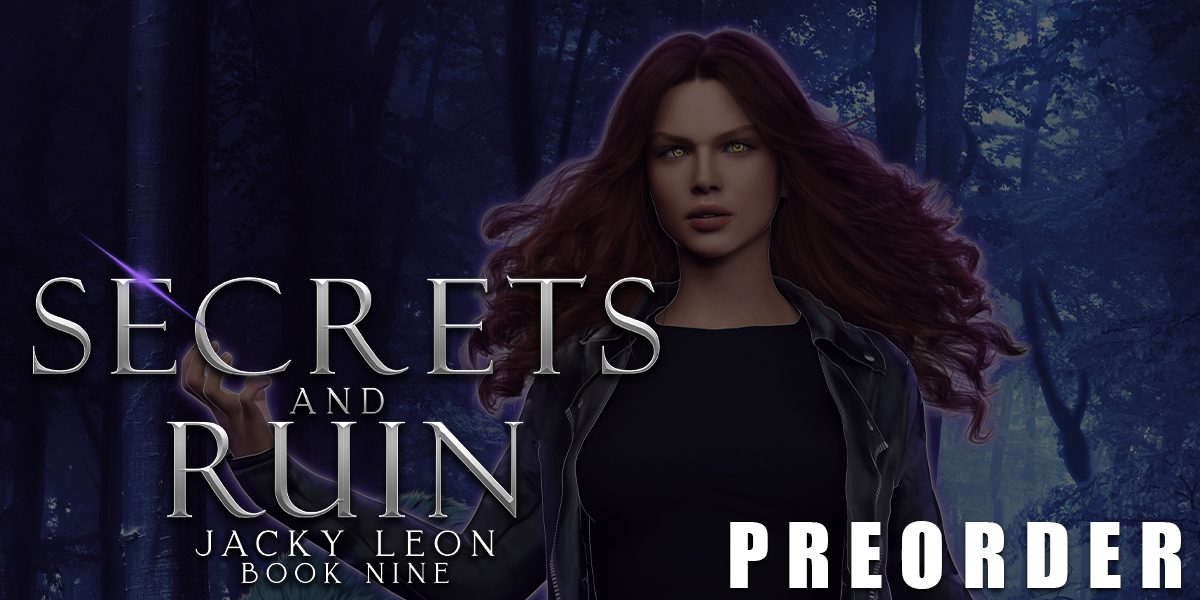 Has it really been since July since I did a blog? At all? Yikes. I knew it was along while ago, but I didn’t realize it was 4 months.

It’s not because of anything more than my own issues. It’s been a long year, y’all, but today, I come to you with news! The featured image is about Jacky 9, but that’s further down. More important news first.

After much struggle with being let down by those I worked with and being forced to end those relationships, Erika has stepped up to help me with the site and keeping news coming when I’m busy or overworked. She’ll be doing fun blogs to talk and keep everyone up to date. She’s been consistent at making sure audio gets out as quickly as possible, staying in touch with the narrators and more. She tracks accents, y’all. All of it. She ALSO acts as my contact with my French publisher. Now she’s taking on the website! She’s insane, but I love her for her endless support through thick and thin, always stepping up when I’ve needed. She’ll be doing the Patreon update for December, which will cover everything that’s happened over there since April as well. So if you want big Patreon news, you can wait for her blog here or wait for my monthly post on Patreon on December 1st. She and I might have thought of something for it…

Oh, wait… Let’s go back a second… What was that about a French publisher?? Did I never tell you about that?

JACKY LEON IS GETTING TRANSLATED INTO FRENCH! -insert screams of joy-
I’ll have more news on release dates as those draw closer.

There was also a release just a week and a half ago!

If you haven’t gone to read it yet, please do! I love Everly, I love writing her grow into some formidable, resourceful, and intelligent.

Now, I clearly had to push back Everly a couple of times this year during the hardest part of this year. There’s a few options about how I can handle that situation.
A. Getting her back on the March/September schedule I wanted originally (Book 4 in April, then Book 5 in September)
B. Putting her on May/November where Kaliya once was
C. Something entirely different, that really doesn’t need explaining here because it’s not a massive impact to you all or the books you want.

Book 4 of Everly will get a preorder BEFORE THE END OF DECEMBER. I just don’t have it ready yet and I want to figure out my answer to the above situation before I commit to any date.

Now, onto JACKY LEON BOOK 9… Who I used as the featured image to get everyone’s attention.

Dirk, my werewolf nephew, is going home.
Sending Dirk back to his father is complicated, but I have to do it. Even if it’s for a short time, I know that father and son need to talk about what’s changed between them. They need to talk about what the future holds for both of them. One year. That was how long we wanted to keep his new status as a werewolf as secret as possible, before we involved the family. That one year is up, and now, it’s time to face the music. Niko is only the start.
However, secrets are insidious things. They can stay hidden for decades, even centuries. Dirk and I kept have been keeping several, but we’re not the only ones. When too many secrets finally come to light, we’ll be left standing in the ruins of more than one family.
It’s too late to stop this, but I’m Jacky Leon and I’ll be damned if the secrets of generations past ruin the family I’m building in the present.

I hope you’re all excited for book 9! I know I am. Time to reveal some secrets and bring some plot threads to a critical point all at the same time! 😀

Wooooo I’m sorry you’ve had sucky life issues but I’m glad you’re getting extra help with everything. And I’m reading Everly now, one of my favourite characters I think. Can’t wait for more or of Jacky! I love the worlds you weave x

Yayyyy!! I thought I loved Jacky the most but you surprised me with Miss Everly! She’s brave, smart and resourceful. 👏🏾👏🏾

You have a solid hit with Everly Abbott, enjoying it a lot. And Jackie is always a winner.

Real talk. Everly Abbott is a great character! Another strong woman like Jackie Leon. They both know their own minds and will stop at nothing to protect those they love. I also adore Kaliya. It’s fascinating to me how the worlds are all going to intersect, and these characters will play such an incredible role in the story. I can’t wait to see what the big picture is and who the bad guy/guys/women really are and why they are doing what they are doing.

There are a couple of typos. Next time I read would you like me to screenshot when “I knew what you meant but that’s not what was written.” ?

I’m going to get a submission form set back up. This was something an assistant normally handled for me so I didn’t receive dozens of emails over the same typos. So I need to set something back up.