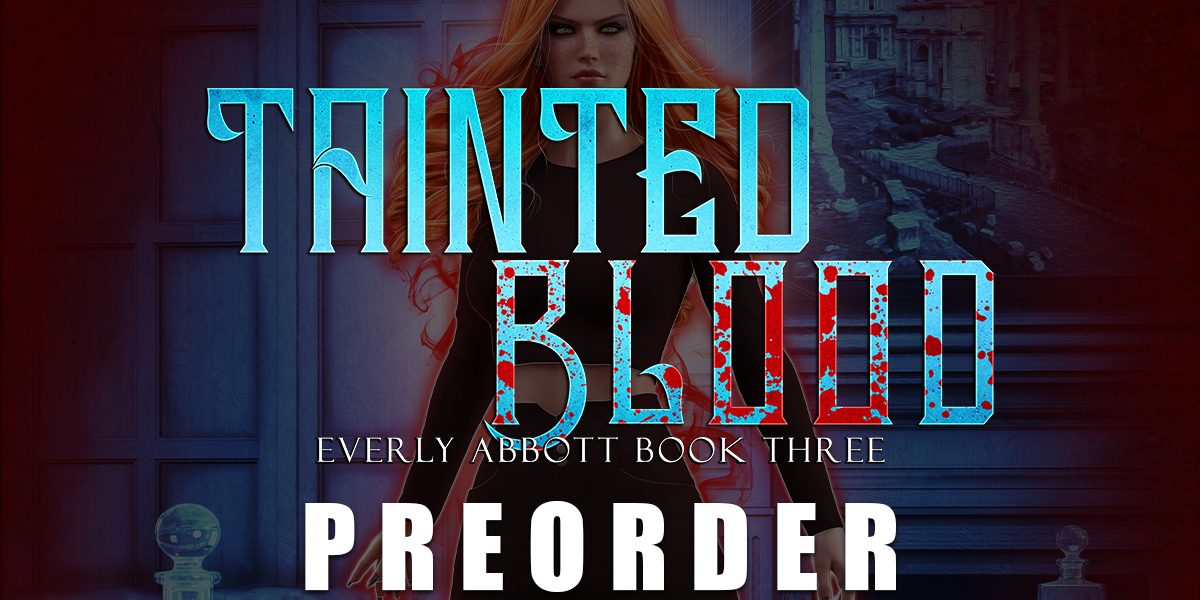 Finally. Yes, it’s here. 3 weeks later than I would like, but I was stuck.

You heard that right. I was stuck.

I’m behind on writing, you see, which means I’m trying to think of the book I need to write. But at the same time, I had to think about Everly’s series plan and formulate exactly how to frame what I wanted for the next book. I was also stumped by health things and I’m still trying to get back into the swing of things. That’s why there’s been so much news. I got to get done with one thing at a time. Figuring out this preorder is one of those things I just needed to be stumped on for a few weeks until it clicked and I got it worked out.

Generally, life has never been this out of control for me before, but I am really hoping it’s all caught up by the end of June. Back to the main thing you’re here for.

TAINTED BLOOD, the 3rd Everly Abbott book, is now up for preorder and I am very excited for it. This supernatural thriller-urban fantasy-paranormal romance cross is just… I love it because it is different from my others.

She’s got a bit of a new look for the cover. Lemme explain.
She’s the same base model I’ve been using. Unchanged. But… new hair, better freckles, AND a new outfit?! Our little Everly is growing up! She’s left behind the blue jeans and grey sweater for something a bit more classy (though,. she has still paired that cute outfit with tennis shoes because she’s a smart woman). It might only stick around this book, that outfit. We’ll see. I’m also just better at covers now. I love her current look, though so it might stick around. (Thank god those bangs are gone)

I’m Everly Abbott, and I work for one of the most dangerous vampires in the world.

He’s known as Alexius, the Hunter and he’s also one of the oldest.

We’ve been invited to a gathering of ancients like him, and we can’t pass on this opportunity. We’re hoping to gather information, anything that might draw us closer to the group behind Jacob’s murder, the events in Alaska, and the threatening email I received. However, we’re not the only ones attending with our own agenda.

Ancient political rivalries and dangerous schemes wait for us in upstate New York. Even our host, Isaiah, Master of the Tribunal, is on edge. He has good reason to be.

A gathering of ancient vampires can be a grand affair.

It can also be a deadly one.