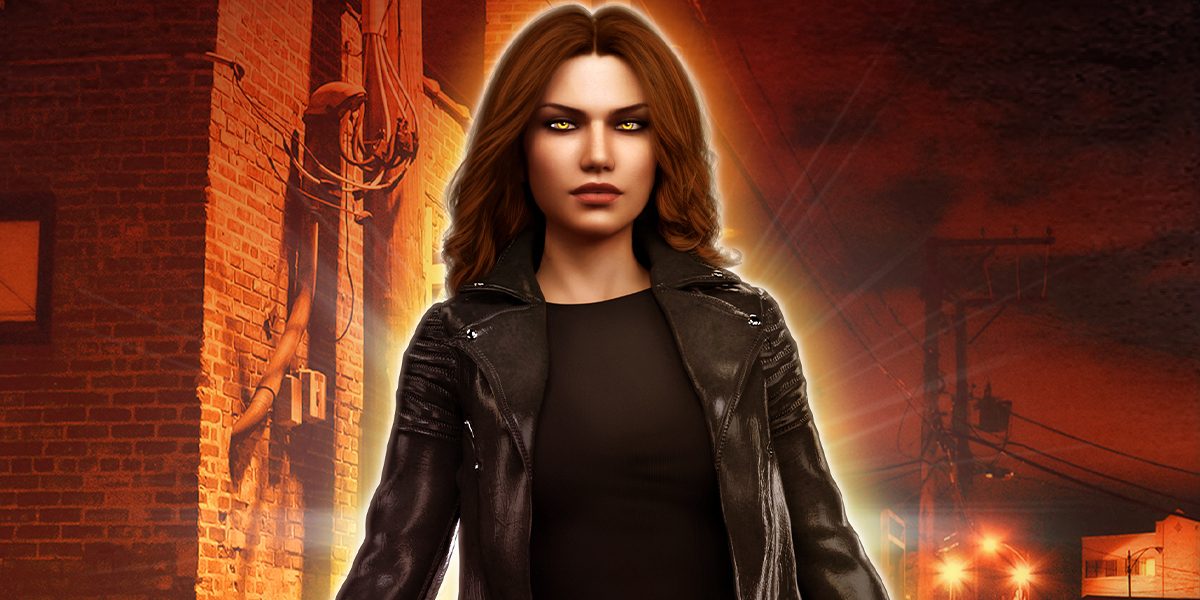 Well, this POV is kind of sad. Or really sad, depending on your perspective. Ever considered how Carey got all the way to Jacky in Oath Sworn? Here’s your answer.Sometimes, I wonder what the hell possessed me to write certain things, especially right after I finished writing them. This is one of those times. I don’t know. Someone mentioned writing Carey when meets Jacky. I decided to write Carey through her entire trip from the moment her home is attacked to when she gets to Jacky. Because she’s a smart kid and her dad had rules to follow that helped her every step of the way. Because it’s been a while since I wrote Oath Sworn and I wrote this from mostly memory of the book, please forgive me if there’s an error in here or anything. This was pretty off the cuff (as these POVs tend to be).

When the wolves came into the room and he brothers started to fight them, telling her to run, what did she do?

Down into the basement. Grab the bag near the small access door to the crawlspace under the house. The door was too small for full grown wolves. They didn’t catch her in time. She crawled fast, going to another trap door. Down into the small tunnel through the trapdoor, he father had told her. Never go back and check on her brothers or him. Just go into tunnel and keep running.

Dad had made her do this before. He played make believe a couple of times when she was younger. He would tell her brothers to pretend to be scary. He would always be waiting for her at the end of the tunnel.

Carey felt a tear run down her cheek.

He wouldn’t be this time. She knew that. Her brothers weren’t playing make believe this time. This time was real.

It was never supposed to be real.

She made it to the end of the tunnel and came out, gasping for air. She heard a howl. It was so dark, but she knew she couldn’t stop. She had to keep running, like he always told her to.

She knew where she was and where she was supposed to run. He’d made her do this before too, always going with her. Carey was doing it alone for the very first time.

She found the road at the back of her dad’s land and the shack with the four wheeler. She knew how to use it. It was the same type she played on with her family. She got on, trying not to cry and turned it on, using it on the little road. It didn’t have much gas. It would get her to the gas station, where there would be people. People were good as long as they weren’t wolves.

That was Dad’s second rule.

“Never stop for any werewolf. Not one. Humans only. You know how to tell the difference, right?”

“Werewolves will sniff the air when looking for someone.”

Carey remembered them all now. Her dad would take her to gatherings and quietly ask her who was and wasn’t a werewolf. Now she never messed up.

When Carey made it to the gas station, she saw a human woman alone, leaving with a bag. Carey drove up and jumped off her four wheeler.

“Ma’am?” she called, scared. She knew what she had to do, but this was one thing her dad never let her practice. Not ever. He said there was no good way to do it and she was just going to have to keep following the rules.

The woman turned around and seemed surprised.

“Oh, hi sweetie. What are you doing out this late?”

“I need a ride,” Carey said timidly. “Before the werewolves come.”

A truck pulled up and Carey watched it.

“Can you take me somewhere?” she asked, hoping the woman just said yes.

“Aren’t you… I’ve seen you before, sweetie. Who are you?”

“I’m Carey Everson and I need you to take me somewhere.” Her dad told her that if she was ever recognized, she needed to not lie. Maybe being his daughter would help her. She always liked it when she got free ice cream for being his daughter. That was always nice.

“Just take me somewhere. I know where. I have an address.” Carey started fighting with the zipper of her bag.

A howl stopped the lady from talking.

“Look, if you don’t take me, I’ll walk. That’s okay.” She couldn’t stay here and argue. They were out looking for her now and Carey didn’t want to be around when they got to the gas station.

“Get in,” the woman said quickly, looking into the woods on the other side of the road.

Carey nodded and followed the woman to her car. Once the door unlocked, Carey got into the front seat. Her dad always made her ride in the back, but she needed the big window in the front to see.

The nice lady went really fast out of the parking lot.

“Don’t tell me your name. You could get hurt,” Carey said quickly. That’s what her dad had said. Protect the humans. Don’t give the werewolves the ability to hurt anyone else. Names weren’t important.

Carey pulled the small knife in her bag out, just in case. That was rule number three.

“Carey, what do you do in a stranger’s car?”

“Keep my knife ready. Stab them if they try to hurt me.”

He had looked really scared telling Carey that rule. Now she knew why. It was really scary to be in a stranger’s car.

“Drop me off here,” Carey said, showing the woman an address. She couldn’t let the lady drive her all the way.

“What’s there?” the nice woman asked.

“None of your business.”

It wasn’t super far. Dad had always said that from this spot, Carey could walk. It would be a long walk, but the werewolves wouldn’t realize where she was. They would be too busy fighting Dad and his werewolves.

But when Carey got there and the woman drove off, she didn’t want to walk. She went into the woods and cried for a really long time before falling asleep in the building her dad promised her was safe.

It felt like forever before she was done crying and sleeping. She woke up and pulled out the map that her dad always made sure she knew how to read. It was easy. She had to walk down one road. The road the woman had dropped her off on.

“Stay off the road so drivers don’t see you. Don’t lose sight of it, though. It’s going to take you exactly where you need to go.”

Carey’s legs got weak and she stopped for a nap in the middle of the day then kept walking. When it got dark, she found a tree and fell asleep next to it.

She woke up and it was still dark. Or maybe she had slept all day. Carey didn’t know anything anymore.

She saw the glow of a neon sign and wanted to cry. She did for a minute, wiping it away when she read the sign.

“Carey, do you remember what to do when you get there?”

“Don’t let anyone see me. Knock on the back door. My protector will be there.”

Carey didn’t think about that yet. She had to follow the rules. One thing at a time and she would be okay.

Carey knocked over and over, growing more desperate as no one answered.

Then the door swung open revealing the prettiest woman Carey had ever seen in her life. She was prettier in person than she was in the pictures. Her eyes were gold and bright and they glowed like little suns. Carey held back on tears. This wasn’t the time to cry yet. She wasn’t done yet.

“Jacky Leon. A werecat. Daddy, are there really werecats?”

“Yes, Carey, there are and they protect humans like you if you feel like you’re in danger. She’ll protect you.”

Carey searched through a backpack, and found the wallet her dad put in. Then she found the business card, the little thing her dad had made just for her. She couldn’t say anything yet, not until she finished reading the card.

“I am…I’m Carey Everson. I’m a human. Uh…I am eleven years old…” Carey had to fill in some blanks, like her age. That made her stumble, even though Carey knew she was eleven.

“Just get to the important parts,” Jacky whispered. “I know you’re human.”

“I need protection from the super…supernatural community. I am at risk of losing…” Tears began to spill from her eyes. Carey felt so weak and scared. She had made it. She just needed to read the card. But the card made it so real. Not the running or the walking. Not the nice lady in the car. Saying it to Jacky Leon made it real and Carey didn’t want it to be real. “My life through…no fault of my own. I am requesting protection from fang and claw from another with fang and claw. I am requesting that the werecats uphold their duties to the supernatural…community and protect me from all threats inhuman.” Carey finished the card and looked back up at the pretty gold eyes. They looked very sad. She didn’t want to make this nice werecat sad. This werecat was supposed to protect her. Why wasn’t Jacky saying anything yet. Carey decided to plea now. Jacky had to protect her. Her dad said she would be protected if she came here. “Please. They probably killed Daddy. They want to kill me too.”

Carey didn’t know what to think when Jacky pulled her closer and stared at her.

“I, Jacqueline Leon of the werecats, hereby do swear to protect you from all threats supernatural until which time I feel you are in safe hands of family or friends that mean you no harm. I hereby do swear that your life is now in my hands and can be trusted there. I shall treasure your humanity and treat you as one of my own. You, from this moment until which time I know you are safe and no longer need me, are my child of this earth. You will be given all things in accordance to this. Carey Everson, you are hereby under the protection of the werecats.”

Carey leaned into her. For the first time since her brothers told her to run, she felt safe. Just for this minute, everything was safe.